Here we are again! Wizard of the Coast has released 4 more pages of the upcoming 5th Edition Players Hand Book. This time around they have given us the Paladin and the Barbarian.

The picture of the first page depicts a half-orc paladin of Torm the lawful good God of Law. I actually like this character concept and think it would be fun to play!

The barbarian page shows a norse looking man hefting an axe over his shoulder. Um… Wait… Is that Grizzly Adams?

I am sure we will have more to share from the 5E PBH so stay tuned Nerds!

Holy crap! Excuse me while I calm down….

OK I just watched the preview trailer for Walking Dead Season 5 that debuted at San Diego Comic Con and I all but fell out of my freaking chair! I know a lot of people were a bit critical about last season, but if this trailer represents what we can expect this season we are in for one intense ride! Last season we had the crispy burnt zombies. This season we have water logged zombies and they are so incredibly disgusting. I love how the Walking Dead crew keeps reinventing them. The last part of the trailer leaves you wondering if Beth is actually in Terminus and if not who the hell has her!

Is it October yet? I am not sure I can wait that long.

I have to say growing up being gay in the 80’s was pretty tough. I mean I did it in Kentucky for God sake. Now do not get me wrong I had a few supportive friends and my sister to get me though some of the tough times. But… there was no LGBTQ friendly anything or many highly visible out people at the time. So there was no real support in society, actually there was nothing but damnation if I am to be brutally honest. At least that is how it felt.

I used, as many of you do, Role-playing games to escape real life. No I did not play female characters I had no inclination to do so. But what I did do was play characters that were the farthest from gay. I am not sure if it was self loathing or just the fact I felt that I needed to be “normal”. As the years passed (many years) and being a person in the LGBTQ community became more “normal” I actually started embracing who I was and started to play characters that were more like me. One of my favorite characters was in a Exalted game where I was a bad ass warrior who happened to be in love with another man. Who was murdered by a evil Storyteller (you know who you are Mike) that used him to taunt me….  ummm sorry… I digress.

In 2007 when I was reading through the first book in Paizo’s adventure path Rise of the Rune Lords I noticed what appeared to be a same sex couple. I thought it was just my own projection and reread it. No there it was in print a Cyrdak Drokkus (CN male human bard 6) & Sir Jasper Korvaski (LG male human paladin 3/expert 1) and in Jaspers description it stated “Despite his best efforts, his romance with Cyrdak Drokkus has become one of Sandpoint’s worst-kept secrets.” so I was not projecting at all! I can tell you that this inclusion of a same sex romance endeared me to Pathfinder.

Paizo did this without even a mention that it was choosing to be LGBTQ inclusive. So when I read Wesley Schneider’s blog this morning he gave a little insight on why they did not make a big deal of it.

As most of you know by now Wizards of the Coast D&D 5th Edition is out and one thing that is getting some notice is they are now following suit with being LGBTQ inclusive. In the Basic Rules download it states things like “Think about how your character does or does not conform to the broader culture’s expectations of sex, gender, and sexual behavior.” and “You could also play a female character who presents herself as a man, a man who feels trapped in a female body, or a bearded female dwarf who hates being mistaken for a male. Likewise, your character’s sexual orientation is for you to decide.”.

In closing… It is important to feel included and accepted so I am pleased to see that some of the leading RPG companies have taken action to do just that. To those companies I raise my goblet of elvish wine and thank you!

As some of you know I am part of a awesome group of people called the “Guardians of the Community”. We offer our first-aid, first response, and safety expertise to different local festivals. One of our pieces of gear is a nite-ize arm band that illuminates red. This allows us to be seen at night and designates us as a Guardian. So earlier in the year I saw a kick-starter for the something similar in belt form and thought how awesome that would be to use at festivals. They called it Halo Belt 2.0 and marketed for use as a safety piece of equipment for bikers, joggers, or anybody else that would be out at night and needs to be visible. So today I went to the mailbox and what was waiting for me? My red Halo Belt!

One of the cool things about this belt is that it is chargeable through a Micro USB connection (cable included). I am impressed on how sturdy the construction of this 2″ wide 3M reflective adjustable elastic belt is. The illumination strip is 16″ long which comes in 3 different colors red, blue, & green and can either flash or stay solid. It is weather proof and fits up to a 46″ waist. Right out of the box it is bright and consistent along its length.

I was barking mad when I went to their site to find that they are now making dog collars as well to keep your canine companion visible when you decided to walk them at night!

So if you are out prowling at night and want to be seen I recommend looking into getting one of these. I hope you will check it out!

So I saw two awesome movie trailers today. The first was Mad Max: Fury Road and let me tell you something. This movie made me squeal like a little girl. I so loved Mad Max trilogy when I was younger and the fact that George Miller is directing it tells you it is going to be good!

The other trailer was the sneak peak of  The Hobbit: The Battle of the Five Armies and man o man is this gong to be an epic ending to a awesome triology!

Here is yet more of the 5E Players Handbook peak. If they release much more they should just allow us to download the whole pdf! 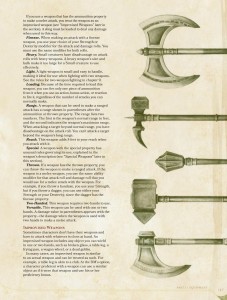 I hope you all enjoy!

I am not sure how much more of the 5th edition Players Hand Book Wizard of the Coast is planning on releasing. Here is the latest 3 pages and the first is the table of contents that shows us just what we are getting! It appears that they will repeat some of the rules that are already in the Basic Rules download. However the word on the street is we will receive more detail on how to create a character using rules for sub-races, for example the Drow. What I am most excited about is the feat descriptions and cannot wait to get my hands on them.

The Sorcerer class looks pretty fun. I have played a couple of them in the past and love that they do not use spell books. I am glad to see that has not changed.

Well I am not sure how much more they are going to show us before it’s release next month but I am liking what I am seeing for the most part!

Yesterday this was shown to the masses at the San Deigo Comic Con! Thankfully they have posted it on YouTube for our enjoyment as well!

I figured for completion sake I should post the little tidbit that was released showing off one of 5E’s feats. I present to you the Tavern Brawler feat. This at the very least gives us a idea how feats are going to look and effect game play.

Blurb – The Hobbit and Friends at San Diego Comic Con!

If you are like me you are stuck at home wishing you were in San Diego with the rest of  our fellow nerds. I have been watching with envy on my twitter account and here are a couple of Hobbit things that caught my eye!

I may post again tonight it I find anything else that tickles my fancy.